“A form of communication”; “a bond”; “happiness”; “a form of love”.  These were some of the thoughts young people had of what a relationship is, as relationships (with a focus on women) was the point of discussion at the Young People Insight forum on July 19th. 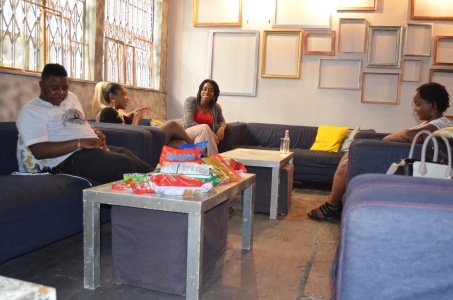 We starting by talking about what we think makes a healthy relationship, with responses that included:

I then threw in the question of why are so many people in unhealthy relationships, which brought a variety of answers:

This brought up the problem of insecurity and the query of why so many of us are so insecure.  Alana, 21, gave a great response, expressing that we need to learn to love ourselves 100% and bring happiness to ourselves, rather than relying on external factors.

Andrae, 25 believes that “communication is the key” to relationships, but why do so many of us struggle with effective communication?  Andrae thinks that it’s because some individuals don’t want to hurt the other’s feelings, while Alana thinks that some people are afraid to open up and show their true selves.

Rhianna, 21, believes that it stems from trust issues as if you have trust issues, you might not be able to talk properly or you don’t really want to have to explain yourself.  Andrae also brought up social media – “Instagram plays a big part” – and Sh’kira, 22, made a good point about lots of people having their own different issues.  She said that people are in their own worlds and their own minds most of the time.

Asking how we improve the way we communicate proved to be a very difficult question to answer, as communication seemed to be something that most of the young people struggled with and wanted to improve themselves.

I kicked off that part of the discussion, which eventually resulted in some good solutions:

One of my favourite points of the evening was made by Alana, when I asked why we struggle to communicate – she said that we’re living in a technological age where “people are communicating with emojis”.

This month, there was a special focus on women and relationships, adding a little more depth to the discussion.  We started by discussing why females are objectified and pressured into certain behaviours to “get a man”, which sparked off an interesting dialogue.

Alana stated that “It’s a man’s world” and that women are being seen as toys or things to be used.  However, Andrae thinks that it’s because of the way a women dress, but Billie, 24, strongly expressed that “it’s insulting to think that people don’t think you dress for yourself.”

Rhianna thinks that some women feel like they have to act a certain way, while Billie added that “it’s all to do with money and consumerism.”  There was also the important point of males trying to have more control with less effort, wanting females to come to them and do whatever they want them to do.

Why do you think women are objectified? pic.twitter.com/BoFXeNJenZ

When asked why some females portray themselves in a certain way to get male attention and affection, Alana said insecurity and the pressure that they have to be sexually active all the time.  Rhianna made the brilliant point that a lot of women are confusing attention for affection, and Alana also thinks that it’s because they’re not getting affection from the places they need it.

I then posed the question, as women, what do we associate affection with?  Responses included:

Finally, I asked how we can develop healthy relationships, which resulted in some really nice answers.  They were:

How can we develop healthy relationships? pic.twitter.com/H4vH1oqGMB

The next forum will be Relationships Part 2 with a special focus on the men, at Project B from 6.30-8.30pm on August 16th.  You definitely won’t want to miss it, so tell a friend to tell a friend.

4 thoughts on “Discussing Relationships at the YP Insight Forum”