Whenever I describe what Young People Insight is, the tagline is always a platform that empowers the voices of young people and encourages community engagement.  However, there is a lot more to it than that.

One of the things at the core of YPI is developing connections, which essentially stems from the community engagement element.  I want young people to build connections that would have been otherwise missing if they did not attend a YPI event, expanding their creative, cultural and personal networks. 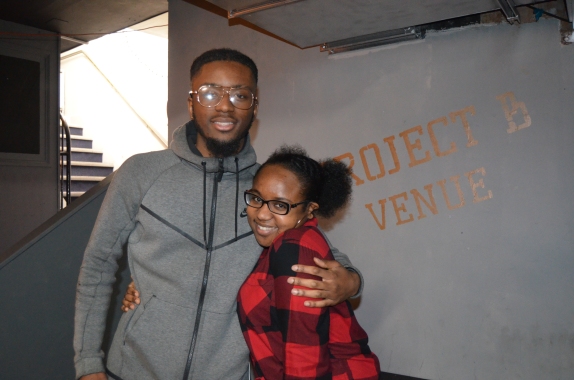 I do my best to look out for all of the young people involved and show support in any way I can, whether that is through congratulating them on their achievements, wishing a happy birthday or attending a poetry night where they are a feature.  The personal aspect of YPI is key, and I believe it is one of the ways that makes it stand out.

During the last festive season, it meant a lot to be able to give three young poets who had shared their work at Poetic Insight the chance to be part of Croydon’s Festive Fantasia, with their words projected and heard (I was fortunate enough to read their reads) in Croydon Town Centre.  It is important for me to act as a connector between the young people who engage with YPI and the rest of the world outside of YPI.

However, what I most love is seeing the different connections that form between individuals who attend the events.  Sometimes I worry that I am not making a difference or having enough of an impact, so watching those connections and friendships grow provides me with evidence that YPI is actually making a difference in the lives of others.

I smile when I listen to the great conversations continuing after The Kickback has formally wrapped up.  I am filled with joy when I see personal exchanges taking place at Poetic Insight, which I did not even want to stop last month despite having poetry performances to get on with.  Yet what I love most is hearing about and seeing evidence of friendships being solidified outside of the monthly events.

There are quite a few that have built over the past two years, but I want to highlight the most recent friendship that developed at last month’s Poetic Insight.  Samirah and Mhairi did not know each other, but the both of them were coming to a poetry night for the first time.  They ended up sitting next to each other, eventually started talking and then did not stop.

When I saw Samirah and Mhairi at a poetry night in Croydon on Tuesday (Samirah got up on the open mic and smashed it in her first ever sharing of her poetry, which made me really proud), they were sitting together behind me and told me that they had also been to a poetry night together on the Sunday just gone.

I later learned that they had been in regular contact, which I thought was beautiful – two people who were initially complete strangers became friends because they came to my poetry night.  For me, that is what YPI is all about.  I want people to be able to make friends through meeting new people that would not have come into their orbit without The Kickback, Poetic Insight or even TCFT Croydon.

We live in a technological age where physical human connections and interactions are being lost, which I think is incredibly sad and can also become a danger to well-being.  That is part of the reason why I started YPI and believe that the events are essential to young people in so many ways.  I’m glad that I can play just a small part in connecting others and making meaningful links.