“What will happen if we focus on peace for a week?” was the thinking Katie Rose had that led to her to developing and organising Croydon’s first ever Festival of Peace.  On June 19th, we focused on peace by combining The Kickback with Poetic Insight, as part of the programme for the festival.

“This project is a the result of the amazing collaboration and power that is in Croydon,” said Katie to start off the discussion segment of the event.  “Taking the focus away from war and focus more on peace.  What will come from that?”

The first question I asked linked in with one of the things Katie said, which was, what does peace mean to you?  Eileen was first to answer: “Not having to go out… It’s nice to shut your door and not have people giving you any weird experiences.”  Karen followed up this point by saying, “Sometimes I feel solitary time is not stepping back.  It’s living your life.”

For Sid, peace is more to do with understanding and accepting, while Aaron says that “It’s being one with God, and loving Him, and obeying Him or Her.  Also balance.  It’s important to balance between life.”

Steph thinks that you need to have a sense of inner peace to have a peaceful community, but there will always be friction – “I think it’s important to have tolerance.”  This led on to an interesting point from Katie, who said , “Peace doesn’t mean no conflict.”  Sid then said, “Discussion is what leads to the resolving of all kinds of conflict.”

There was also an interesting point in our conversation when we spoke about the hatred towards vegans, which was validated by Steph and Eileen who are both vegan, which we all found incredibly strange. 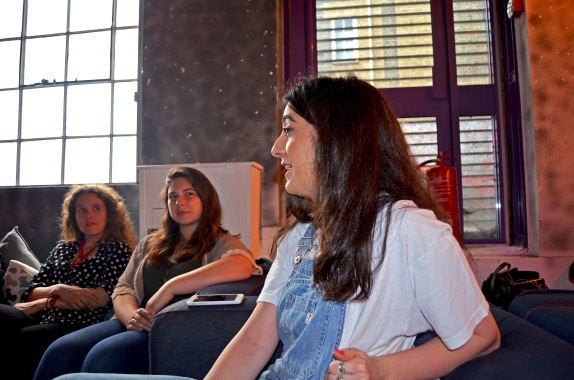 Next, I asked why everyone thinks peace isn’t spoken about more in society when we continuously hear about war.  Eileen responded first again, saying, “Peace may come across as giving in.  It may be seen as weak.”  Aaron then posed the question, “Does peace sell?  People often gravitate to what isn’t peaceful,” – “People are attracted to conflict,” said Steph.

“It’s the minority of people who commit the violent acts in society.  It’s the minority who get all the press… It keeps everyone in fear of each other,” Katie expressed.  On a different level, Sid said, “People are naturally very cynical,” as if you’re doing something good or charitable, people question why you’re doing it.”

Si-Ann made the interesting point of peace being played off as the kind of opposite of power – “Peace is pushed as the kind of nerdy thing that nobody really wants.”  Hannah also thinks that peace is synonymous to politics and we’re encouraged to stay away from politics.  Joe linked into Hannah’s point by saying, “Politicians will talk about dropping bombs on someone… but they won’t say what’s coming next.”

Katie thinks it’s about being hooked on drama, “because drama is an adrenaline rush.”  She also made the point about war being “big bucks”.  Karen brought in a health element by saying, “I think a lot of the food we eat is quite inflammatory, and when you eat it, the more you want to fight.” 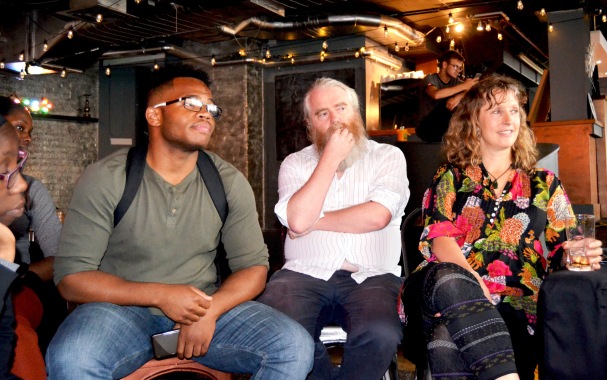 I then asked people to share what makes them feel peaceful.  “I think that it comes down to self-care.  As people, we forget to look after ourselves… It’s taking care of yourself to be your best person,” said Matu.  Karen B shared that being outside makes her feel peaceful – “As soon as I step outside, that sense of peace comes over me.”

For Karen, having good boundaries in place with whatever she’s doing makes her feel peaceful.  Matu also believes that protecting yourself makes you feel peaceful, and she then went on to reference that the movies we watch expose us to war and can make us desensitized.  Sid also made a beautiful point, stating that “Inner peace is kind of like you’re healing yourself.”

The final question I asked was, how can we bring more peace to our community and society as a whole?  Aaron quickly said, “Get involved,” while Katie said, “Arts activity, which is why I started this festival.”  Katie added, “I think art is really important for our well-being… Arts activities have this capacity to bring us together.”

Si-Ann thinks it is about being very cautious of the way we react to situations – “When situations occur, sometimes we behave in a way society has conditioned us to behave.”  Karen believes that “you have to accept every single person in your community, no matter who they are.”

Sid thinks that it “really does come down to education.  When you’re educated on certain matters, that can work towards peace.”  Aaron responded to Sid’s point by saying, “We shouldn’t just be educated people, we should be people of action… When we really value what we bring to the table, more people will get involved.”

This tied in with what Joe said, which was, “I think a more peaceful world is where people are involved… Doing things, you get more involved in how to make change.”  Finally, Aaron said, “When we all see each other not just as other people, but we’re all family, we will get more involved.” 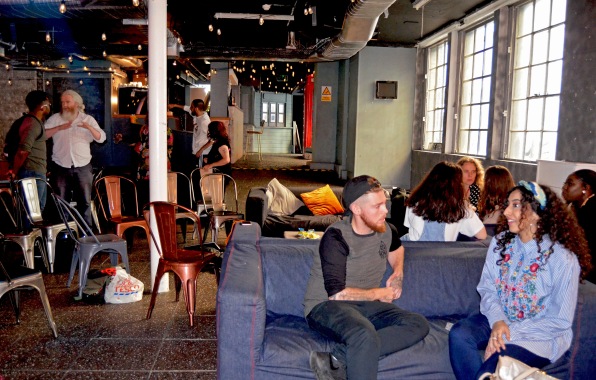 Following the discussion and a little break, it was on to the poetry segment of the night, which is always beautiful.

We had five wonderful open mic’ers in Aaron, Eileen, Hannah, Samirah and Woodzy, who brought their unique styles to the stage.  Aaron was the only Poetic Insight returnee, with all the rest gracing our stage for the first time. 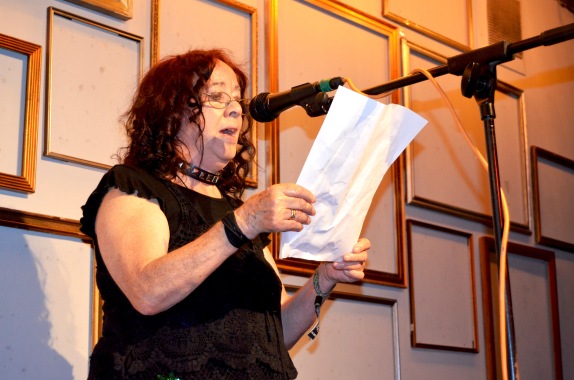 Another first on the night was having feature poets, which isn’t the Poetic Insight tradition, but this was a special event so we did something different.  We were fortunate enough to enjoy the talents of three amazing features, who were the icing on the cake for the night. 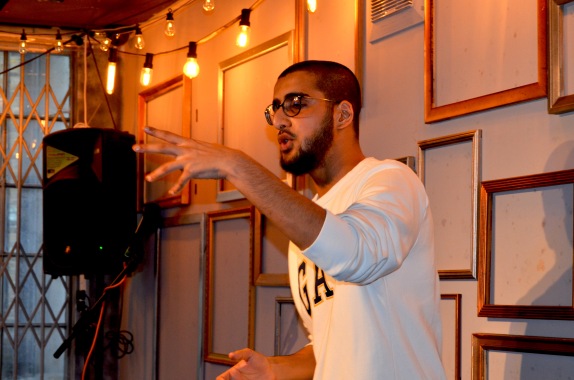 First we had returning poet, AadamSpeaks, who brought his witty words and meaningful messages to the stage.  Next was Joe Duggan, who was taking to the Poetic Insight stage for the first time and championing the inter-generational element of the night, who engaged us with his fun and hard-hitting poetry.  Finally was Poetic Insight veteran, Sid, who came with his usual powerful and hard-hitting spoken word. 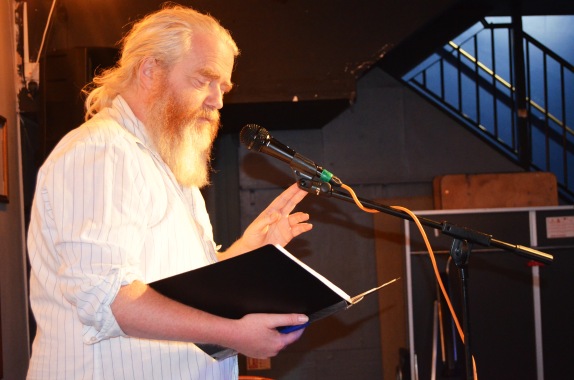 If you weren’t there, you definitely missed out on an amazing, beautiful event that did a great job of bringing people together.  The conversations went on long after the event officially finished.  Thank you to everyone who was part of it.  Let’s keep spreading the peace. 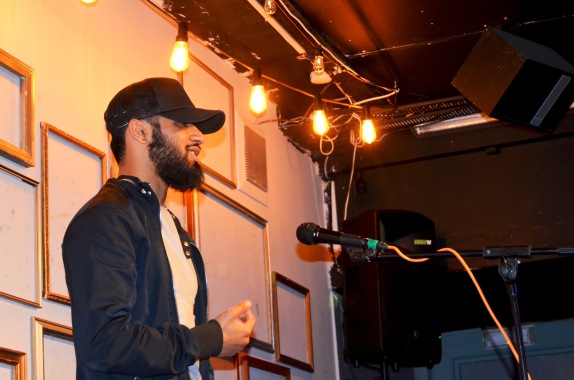 The Kickback returns on July 24th when the topic will be Goals, and Poetic Insight returns July 31st when the theme will be Dreams & Goals.  Make sure you get both dates in your diary.

2 thoughts on “Celebrating Peace at The Kickback / Poetic Insight”